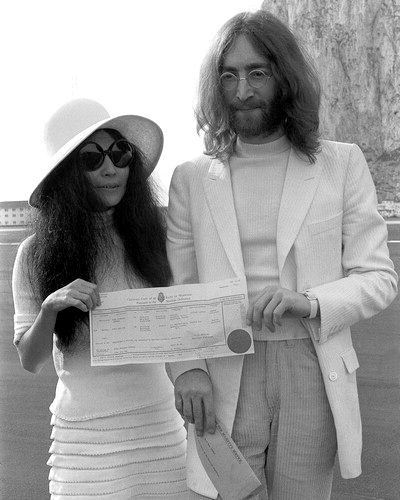 Yoko Ono with Linda Farrow sunnies together with John Lennon.

I love this picture, can’t get enough looking at it!

I’m so amazed about the story of Linda Farrow. With her roots as a clothing designer, she was the first person to put glasses into fashion and kind of the first woman to enter the very men manipulated optical business whatsoever. After designing glasses for the biggest fashion houses she established her own company 1970. She became very quick famous for her fashionable eyewear designs, worn by Yoko Ono among others.

A couple of years later she laid down the business to focus on her family instead. Now, decades later, the Linda Farrow business is active again. This time by her own son and his girlfriend, who came up with the idea after finding an old stock of vintage Linda Farrow eyewear. Today Linda Farrow is a worldwide brand again, still focused on eyewear as a fashion item. Besides the Linda Farrow vintage line, they also do collaborations with the fashion world and lately they’ve even created their very own line: Linda Farrow Lux. A prestigious high-end line, using the finest materials only.

View all posts by Barbara Canales